Sign up to myFT Daily Digest to be the first to know about Coronavirus pandemic news.

Travel these days requires an awful lot of paperwork. On a recent trip to Italy, I needed to produce proof of vaccination, proof of three different negative lateral flow tests, proof of the booking of a PCR test, a passenger locator form for the EU and a passenger locator form for the UK. Some of the forms were badly designed. Websites had a habit of crashing. And certain rules called to mind sledgehammers and nuts.

I could not begrudge the bureaucracy. I was trying to jet around the world in the teeth of a pandemic. But as I tried to fill in yet another form, a gloomy thought arose: what if all this paperwork never goes away? Sars-Cov-2 is in no imminent danger of being eradicated, after all, and red tape can be sticky.

For context I picked up Martin Lloyd’s lively history The Passport and was only somewhat reassured. In premodern times the default assumption was that nobody was allowed to travel anywhere — often not even to the next town — without official permission. Over time, and unevenly, freer movement became possible.

In England in 1215, the Magna Carta included a clause proclaiming that “it shall be lawful for any man to leave and return to our kingdom unharmed and without fear”, which Lloyd characterises as “an early attempt to abolish a passport system”. That attempt did not last, but the British long disdained the idea of passports and in the 1800s such documents as they did issue, signed personally by the foreign secretary, supplied no physical description.

In 1835, the newly independent country of Belgium requested that “all foreign governments” supply details such as age, height and hair colour on the passports they issued. In an exchange the current British administration can only dream about, the British foreign secretary Lord Palmerston described the passport system as “repugnant”, the request for personal particulars “offensive and degrading”, and told the Belgians that if they wanted to destroy their tourist industry that was their own choice.

The Belgians backed down. In discussions with Brussels in those days, the British government really did hold all the cards.

In any case, opinion was moving towards the British approach. Emperor Napoleon III of France noted admiringly: “In England the first of all liberties, that of going where you please, is never disturbed, for there no one is asked for passports.” The US and most European countries had abandoned passports by the end of the 19th century. In many South American nations, freedom to travel without a passport was a constitutional right.

So how did the passport come roaring back? The answer was the first world war. Not only were there spies to be intercepted, but identity cards and similar documents enabled governments to keep tabs on their citizens — and find more recruits for their armies. Lloyd writes: “At the end of the war in 1918, the movement to abolish passports re-energised itself but it was now fighting against governments who had discovered how closely a population could be controlled and how easily this could be justified.”

Passports aren’t the only wartime measure to become permanent. In the UK, income tax was introduced in 1799 as a temporary means of funding the war against Napoleon Bonaparte’s forces. It has proved less temporary than advertised.

What, then, of all these certificates and locator forms? Will they join the passport and income tax as emergency measures that somehow lasted for ever? 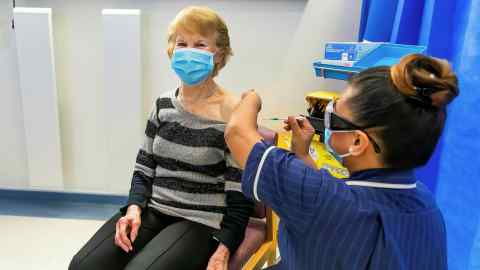 The cynic in me fears that this paperwork will last far longer than necessary, but the evidence suggests that countervailing forces will assemble to oppose the regulations. The World Bank’s Doing Business project tracks the cost and time required to comply with regulations such as registering a business or securing a construction permit. Places with the simplest rules include New Zealand, Singapore, Denmark, South Korea, the US, the UK and Sweden, and the leading economies are usually on the hunt for further improvements.

There is a hopeful scenario — to my mind, at least — in which governments manage to both strengthen and streamline their public health information systems, so that ordinary citizens can move around easily in normal times, but in which information about tests, vaccinations and even quarantine can quickly be gathered when needed. Having to show proof of vaccination may feel oppressive to some, but during a health crisis, being able to do so effortlessly might be far preferable to the alternative. Income tax can also feel oppressive, but few object to the principle.

The festival is back and in person at Kenwood House (and online) on September 4 with our usual eclectic line-up of speakers, including Tim Harford. Infusing it all will be the spirit of reawakening and the possibility of reimagining the world after the pandemic. To book tickets, visit here

Perhaps the history of the passport can teach us a lesson. Since we don’t live in a world where anyone can stroll across any border, the passport has become a tool for streamlining and democratising travel, and even for defending human rights.

A 1920 conference of the League of Nations began the process of agreeing international standards for passports and ensuring any citizen could have one for a reasonable fee. “Nansen” passports, informally named after their promoter, the polar explorer Fridtjof Nansen, were issued by the League in the 1920s. They were given to refugees after the chaos of the first world war and the Russian Revolution. Nansen passports enabled, rather than restricted, the freedoms of those refugees. They weren’t red tape, but a ticket to freedom.