Sign up to myFT Daily Digest to be the first to know about Women in business news.

When Elinor Ostrom became the first woman to receive the Nobel memorial prize in economics, in 2009, she quipped: “I won’t be the last.” Although she has since been proved right, it was nonetheless astonishingly late in the day for such a landmark. Adding to the awkwardness, Ostrom, who died in 2012, won despite being outside the mainstream of economics. So does economics have a problem with women? And do women have a problem with economics?

Earlier in the summer, the Royal Economic Society published a report surveying the gender imbalance in economics in the UK. (I used to serve on the RES Council, the group which oversees the Society’s activities.) The picture is not encouraging. Academic economics remains a largely male activity, and the more senior the job grade, the more male-dominated it is.

Women make up 32 per cent of economics undergraduate students (up from 27 per cent in 1996) and 26 per cent of academic economists (up from 18 per cent in 1996). Over a quarter of a century, this pace of progress is not inspiring. It’s also bad news for economics. The economist Diane Coyle, professor of public policy at Cambridge, puts it succinctly: “It’s not possible to do good social science if you are so unrepresentative of society.”

The problem seems much more acute for academic economics than for economics in general. Half of all UK graduate students in economics are women. These women then seem to head into the private sector (banking, consultancy and information technology all beckon) — or they go into think-tanks, the Bank of England or the Government Economic Service, all of which employ a greater proportion of female economists than do the universities.

Internationally, women currently run or recently ran the US Treasury, the US Federal Reserve Board and the IMF. The chief economists of both the IMF and the World Bank are women.

So it does seem extraordinary that academic economics is so inaccessible or unattractive to women. Part of the problem is the precariousness of junior academic jobs in all fields and the demands to publish at a frenetic rate just at the moment at which many women are thinking of taking maternity leave. It should not be impossible to rethink academic jobs to make them appealing and available to people with other demands on their time. So far, though, it does not seem to have happened. 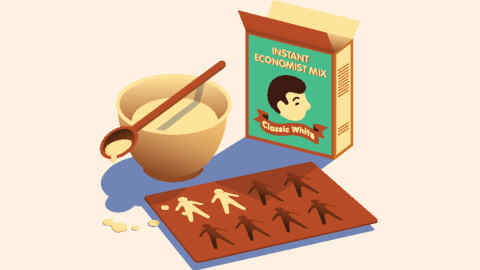 But a lack of a family-friendly career path is not the only problem. Four years ago Alice Wu, an undergraduate at UC Berkeley, published a systematic study of the language used about female academics on the EconJobRumors web forum. (I’ll spare readers the details, which are often graphically sexual, highly offensive or both. But young female economists exploring the academic job market are not spared any details.) Wu’s research triggered something of a reckoning at the American Economic Association, which has since paid far more attention to measuring discrimination against women within the profession. It remains to be seen whether anything productive comes of that but such problems are better acknowledged than ignored.

The economics journalist Stacey Vanek Smith, author of Machiavelli for Women, argues that transparency helps to bring change. In the UK it is now mandatory for any organisation with at least 250 employees to report on any gap in average pay between men and women. Vanek Smith thinks that this rule is now squeezing the gender pay gap: it is embarrassing to have to explain away yawning wage inequality, and bosses do not like to be embarrassed.

It is also now becoming embarrassing to have so few female economists in senior academic positions — especially when women are so visible in senior policy jobs. So there is hope. And one simple step forward is to do a better job of selling economics to university applicants and a better job teaching economics to those who do attend.

The festival is back and in person at Kenwood House (and online) on September 4 with our usual eclectic line-up of speakers and subjects. Infusing it all will be the spirit of reawakening and the possibility of reimagining the world after the pandemic. To book tickets, visit here

Both Smith and Diane Coyle believe that this identification of economics with money and finance is something that appeals more to 17-year-old boys than 17-year-old girls. I cannot prove that the misperception contributes to the gender imbalance but it certainly sells economics short.

An influential open-access course, Core, takes a different approach. It starts with big economic questions of inequality, poverty and sustainable development — issues that students across the world regard as top priorities. Core then uses perfectly standard tools of economics to explore those issues. This does more justice to what economics can be. If it also broadens the appeal of the subject, that is a bonus.

Elinor Ostrom’s career should set an example. She was shut out of conventional economics because, as a girl in the 1940s, she was steered away from maths. She became a political scientist and produced a more inclusive understanding of the questions economics could address, the tools that could be used and the people who should be there when decisions were being made. She was a person who made economics deeper by making it broader. She won’t be the last.

See Tim’s “How to make the world add up” at the FT Weekend Festival on September 4; ftweekendfestival.com