Sign up to myFT Daily Digest to be the first to know about Tobacco news.

The shock and horror that has greeted Philip Morris International’s £1bn bid for UK respiratory drug developer Vectura is something to behold. Public health and anti-smoking charities are calling the deal “an unresolvable ethical conflict” that will kill the FTSE 250 company because medical groups bar scientists from tobacco companies from participating in their programmes.

The maker of Marlboro cigarettes this week tried to address those concerns as part of its formal 165p per share all-cash offer. It promised to operate the group as an autonomous unit focused on therapeutic uses and to set up a “governance structure” to reassure scientists concerned about the tobacco industry’s well-documented history of meddling with scientific truth.

The Vectura board, choosing between moral outrage and a 60 per cent premium over the resting share price, opted to recommend the takeover. The offer now goes to shareholders. If they are convinced by the anti-tobacco arguments, the Carlyle Group is waiting in the wings. The private equity firm launched this drama by bidding for Vectura in May but has refused to offer more than 155p per share.

One could frame this conflict as a clash between shareholder and stakeholder interests. Investors are being asked to forgo about £60m to avoid doing business with a company whose main product kills people.

That would be short-sighted and simplistic. The debate over Vectura is really a test of society’s willingness to let companies reinvent themselves and address the problems they helped create. The moral absolutism that tobacco opponents are displaying bodes ill for the far more important fight against climate change.

PMI’s offer to buy Vectura comes after years of pressure on cigarette makers. More than 170 investors with $11.7tn in assets (including Vectura shareholder Axa) have pledged not to fund tobacco companies.

The shunning is having an effect. The big publicly traded tobacco companies are investing in alternatives to smoking, including heated tobacco, snus (oral tobacco), e-cigarettes and cannabis. These also have health risks, and vaping in particular has been hit by a well-deserved regulatory crackdown. 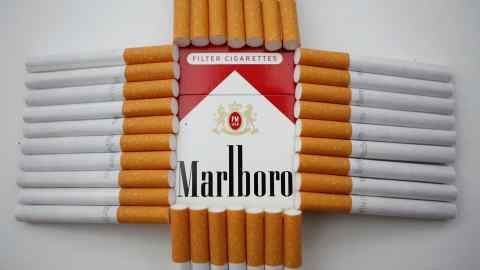 Now PMI is trying to bust out of the tobacco box entirely. Earlier this year, chief executive Jacek Olczak announced a “beyond nicotine” strategy that includes a move into inhaled therapeutics. The company already draws nearly 30 per cent of its revenue from smoke-free products and hopes to hit 50 per cent in 2025. To that end, it has not only bid for Vectura but announced deals to buy US inhaler maker OtiTopic and Danish group Fertin Pharma.

This behaviour ought to be rewarded not decried. To do otherwise creates a class of “untouchable” companies that have no reason to improve. Tobacco groups have a horrible history, but the healthcare industry is hardly squeaky clean. Medical groups generally don’t ban scientists from pharma companies that have paid billions in penalties for mis-selling dangerous drugs or helping to addict millions to opioids.

Black and white thinking about previously dirty industries will also hamper efforts to fight climate change. Oil companies and carmakers have their own sordid history of deceiving the public. Does that mean that they should be banned from researching and investing in carbon capture, solar energy and electric cars? Quite the opposite.

A truly global effort cannot afford to write off existing groups that employ hundreds of thousands of people and have long provided investors with reliable dividends. Far better to encourage a gradual shift of resources by tying executive compensation and external funding to projects that are healthier for people and the planet. Consider Volkswagen, which has invested heavily in electric cars as it seeks to redeem itself from the dieselgate emissions scandal.

“Excluding people based on who they are employed by is the antithesis of what open science is about,” says Moira Gilchrist, a former pharma researcher who heads PMI’s scientific communications. “All of us have potential conflicts of interest. That is true of every manufacturer in every sector, as well as funding organisations and individuals.”

Safeguards will be needed to make sure PMI and other reimagined companies live up to their promises. Anti-tobacco and clean energy activists should continue to press for faster change.

But this time investors do not have to choose between shareholder value and broader goals. PMI executives have, if anything, more reason than Carlyle to make sure that Vectura thrives. Their future depends on it.