Sign up to myFT Daily Digest to be the first to know about Tesla Inc news.

Electric vehicle sales in China surged in July as drivers flocked to local auto brands in the world’s largest car market, while those of Tesla plunged after the US group was swept up in a string of scandals in the country.

The latest rise meant that electric cars took up 10 per cent of total auto sales in China from January to July. Total wholesale auto deliveries in July fell 12 per cent year on year to 1.9m units, CAAM reported.

But EV market leader Tesla sold only 8,621 cars in China last month, according to data from the China Passenger Car Association (CPCA) released on Tuesday. That was a 69 per cent drop month on month and a 26 per cent fall year on year, marking the first annual decline since Tesla opened its Gigafactory in Shanghai in January 2020.

During the month, Tesla also exported 24,347 China-made cars to Europe.

In recent months, Tesla has been hit by scandals and negative press in China ranging from customer accusations of quality problems to government concerns that the vehicles’ on-board cameras might threaten data privacy and national security. 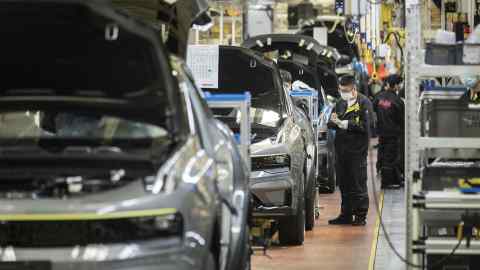 Chinese electric carmakers and established global auto brands have intensified their efforts to dethrone Tesla in China by launching dozens of new models in the country.

New energy vehicle sales from BYD, a Warren Buffett-backed automaker that was an early mover in China’s electric car market, more than tripled year on year in July to 50,492.

Cui Dongshu, head of the CPCA, said in an article published on Monday in the state-backed Securities Times that he expected NEVs to account for 13 per cent of total car sales in China this year.

The CPCA forecast in June that 2.5m electric cars would be sold in China this year, but Cui added that the estimate was likely to be revised upwards because of stronger than expected demand.