China has said it will respect the “choices” of the Afghan people, in the first sign that Beijing was ready to give its cautious support to a Taliban-led government in Kabul.

“The situation in Afghanistan has already undergone a major transformation and we respect the wishes and choices of the Afghan people,” said Hua Chunying, a spokeswoman for China’s foreign ministry, in Beijing’s first official comments since the Taliban swept into Kabul.

The remarks followed an editorial published by Global Times, a state-backed nationalist tabloid, that called the 20-year US effort to reshape Afghanistan a “complete failure” and said the Taliban’s return to power was a “heavy blow” to US credibility.

“The US’ desperate withdrawal plan shows the unreliability of US commitments to its allies: when its interests require it to abandon allies, Washington will not hesitate to find every excuse to do so,” the editorial said.

Analysts expect China to expand its influence and strategic interests in Afghanistan in the wake of the Taliban’s return to power so long as its own security concerns were met.

But any policy would be contingent on the Taliban’s approach to Xinjiang, the region that borders Afghanistan where Beijing has interned more than 1m Uyghurs and other Muslim minorities.

Claude Rakisits, a former Australian security official and Afghanistan expert, said the Taliban would put its relationship with China ahead of any links to the East Turkestan Islamic Movement, a Uyghur militant group that Beijing alleges is a security threat.

“If that means lots of Chinese investment into Afghanistan — I think they’ll do it, absolutely. They’re ruthless . . . but also very pragmatic,” said Rakisits, now with Australia National University. 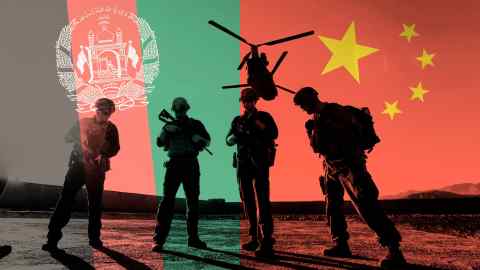 Claudia Chia, an analyst at the National University of Singapore’s Institute of South Asian Studies, said Beijing’s focus would be in “lower risk” engagement, such as aid, housing and basic infrastructure.

Indian government officials have said they expect China to channel funds through Pakistan, one of Beijing’s firmest allies in the region and important partner in the Belt and Road Initiative, its flagship infrastructure-building programme.

But Liu Zongyi, a foreign policy expert at the Shanghai Institutes for International Studies, said China would “not interfere” in the country’s internal affairs.

“Afghanistan lies in an important location connecting Asian countries and is important for [the Belt and Road] . . . That does not mean China is filling a power vacuum, rather it is co-operation between two normal functioning governments,” Liu said.

Hua highlighted the Taliban’s pledge to establish an open government and assure the security of the Afghan people and foreign embassies.

“China looks forward to these commitments being realised to ensure a peaceful transition in Afghanistan where all terrorism and criminal acts will be contained,” she said.

When senior Taliban leaders met with Wang Yi, China’s foreign minister, last month, the group “promised” Afghanistan would not be used as a terrorist base to attack Chinese in Xinjiang, added Liu.

“We’ll see if the Taliban keeps its promise or not,” he said.

Additional reporting by Xinning Liu and Emma Zhou in Beijing