Sign up to myFT Daily Digest to be the first to know about US foreign policy news.

Joe Biden was forced to interrupt his retreat to Camp David on Monday and return to the White House to address the rapidly deteriorating situation in Afghanistan. His message to Americans was clear: he was not backing down.

In his first public remarks since the Taliban took control of Kabul and American television screens were filled with images of hasty evacuations and panicked Afghan citizens, the US president showed no signs of changing course — or accepting blame.

“I stand squarely behind my decision,” Biden said, defending his administration’s withdrawal of US troops from Afghanistan nearly two decades after they first arrived. “I have learned the hard way that there was never a good time to withdraw US forces.”

It was a consistent message for a man who first began pushing for an exit from Afghanistan more than a decade ago as Barack Obama’s vice-president.

But Biden’s allies and critics alike also said it was a speech that underscored the president’s stubbornness. While that quality has underpinned some of his successes — like ushering a bipartisan infrastructure bill through the Senate last week — critics say it can also result in a brittleness that prevents him from switching course when the politics demand a shift.

“He missed the mark and he missed the moment,” Democratic strategist Mary Anne Marsh said after the president’s speech on Monday. “No one disagrees with leaving Afghanistan. It’s how the US left — in utter chaos.”

Doug Heye, a former spokesperson for the Republican National Committee, said Biden’s handling of the crisis risked undermining the White House’s attempt to project competence after Donald Trump’s freewheeling presidency. “If you take tweets out of it, it is sort of hard to imagine how Trump would have handled this worse,” Heye said.

While Biden owned his decision to withdraw troops from Afghanistan, he made no apologies for the harried evacuation of the US embassy in Kabul, or to the tens of thousands of Afghan interpreters and others who worked for the US government and are now seeking refuge.

During last year’s election campaign, Biden’s Republican opponents portrayed him as ageing on the verge of doddering. Yet his refusal to shoulder blame for the chaos in Kabul revived a criticism that has dogged him for far longer: that he has a chip on his shoulder, which means he too often dismisses advisers, especially members of the “Washington elites” who occupy much of the foreign policy establishment.

Even though Biden has spent four decades in Washington, the state-school educated son of a working-class family from Scranton has often given short shrift to policy experts and journalists with Ivy League educations.

In his first 1988 run for president, he famously lashed out at a New Hampshire voter who asked about his class rank at the University of Delaware’s law school: “I think I probably have a much higher IQ than you do,” he growled, jabbing his finger at the questioner.

A version of that obstinance was on display again on Monday as he made a thinly-veiled reference to the fact that many of his military and foreign policy advisers had counselled against a hasty withdrawal from Afghanistan. “I’ve worked on these issues as long as anyone,” Biden said as he rattled through a list of the times he had visited the country.

“I know my decision will be criticised, but I would rather take all that criticism than pass this decision on to another president,” he said before concluding his speech without taking questions.

Biden is wagering that the American public will see the images emerging from Afghanistan and conclude he made the right call, rather than blame him for bungling the drawdown — and some public polling suggests he might be right.

The share of Americans who oppose the war has risen steadily since Gallup, a polling group, first began asking the question in 2001. Last month, 46 per cent of Americans said the US military’s mission in Afghanistan was a “mistake”, compared with 47 per cent who said it was not.

“There is not a lot of public opinion data to indicate this will be some kind of transformative moment for the perception of President Biden,” said Mohamed Younis, Gallup editor-in-chief. 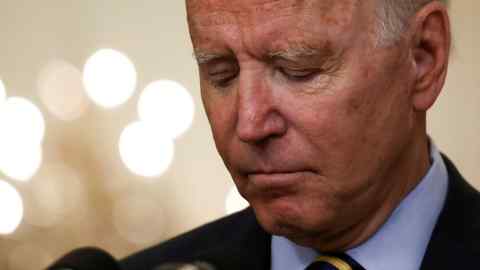 However, a separate Morning Consult poll conducted over the weekend found just one in four US voters think the withdrawal is “going well”. Roughly half said they support the withdrawal, down 20 points from when the question was first asked in April.

Still, some analysts are sceptical that Biden will pay a price at the ballot box. Larry Sabato of the University of Virginia Center for Politics, noted that the fall of Saigon hardly featured in the 1976 presidential race. “Vietnam was not an issue just a year later in the presidential election, and we lost 58,000 Americans there in a war that was more intense.”

Biden himself has frequently drawn comparisons between the wars in Afghanistan and Vietnam. On Monday, he vowed not to ask US servicemen and women to “risk their lives in a military action that should have ended it long ago”.

“Our leaders did that in Vietnam when I got here as a young man,” he added. “I will not do it in Afghanistan.”

Biden sees political parallels too. According to George Packer’s 2019 book, Our Man: Richard Holbrooke and the End of the American Century, in 2010 then vice-president Biden invoked the Vietnam war when arguing that the US should leave Afghanistan despite the humanitarian costs.

“Fuck that. We don’t have to worry about that,” Biden told Holbrooke, who was then Obama’s special representative for Afghanistan and Pakistan, according to Packer. “We did it in Vietnam. Nixon and Kissinger got away with it.”