If Rich Lesser is admired by the colleagues who elected him to lead Boston Consulting Group for nine years, they sometimes had a strange way of showing it.

The chemical engineer had been a consultant for three decades and a chief executive for six years when BCG’s partners handed him a third and final term as their boss in 2018.

As chief executive, Lesser, 59, has overseen a doubling of the workforce to 22,000 and a near tripling of revenues to $8.6bn in 2020 at the firm, which sells strategic advice to the world’s biggest companies such as Starbucks, Royal Dutch Shell, and GlaxoSmithKline.

But as he began his final three-year stint at the helm, partners started knocking on his door to discuss something other than sales and growth: climate change.

“There were senior partners that I respected greatly at BCG, who, for want of a better phrase, were just pounding on me,” he says, speaking from his home in New Jersey.

The group was already working on climate change projects for clients but Lesser says his colleagues were “relentless” in urging him to move faster in mobilising the firm’s resources to tackle the problem. 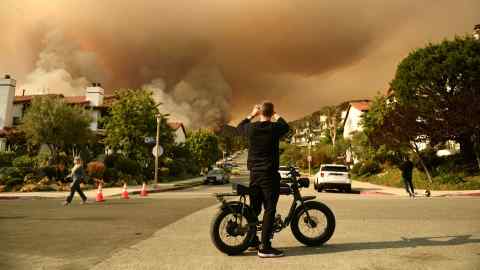 Speaking out on climate change risked drawing the ire of clients in pollutive industries. Public debate on global warming was being conducted in a febrile atmosphere, particularly in the US where many Republicans came to view it as fake science.

Lesser was already managing a rapidly growing firm that was pushing into new areas, such as digital analytics, when his colleagues demanded that he prioritise tackling climate change.

A key moment, says Lesser, came when a senior partner in Germany, Philipp Gerbert, sent an email to all of BCG’s nearly 1,500 partners worldwide outlining in stark terms the urgent need for action on climate change. He refers to it now as a “funny incident” but his initial reaction was different.

“On one view we were kind of like: ‘What’s he doing? He’s just writing this, he’s not checking with anyone and he just sends that,’” recalls Lesser.

“But on the other hand . . . the substance of what he wrote was important.”

In fact, Gerbert, who retired from BCG last year on good terms, told the Financial Times his email had included a 14-minute video, which he self-produced to avoid the potential for any colleagues’ careers to be damaged by being associated with his intervention.

In the video, not shared outside the firm initially for fear it might provoke a backlash, Gerbert presented data in support of acting immediately and argued in favour of mobilising institutions and financial markets to mitigate climate change.

BCG made its operations carbon neutral in 2018 though it was only in September 2020, after Gerbert’s pleas, that it committed to the more stringent goal of achieving net zero climate impact by 2030.

It wasn’t that we weren’t taking it [climate change] seriously. But there’s a difference between taking it seriously and putting the full force of a firm like BCG behind it

The firm wants to cut emissions from business travel — the biggest factor in its impact on the climate — by 30 per cent per full-time employee by 2025 compared with 2018 levels.

BCG has subsequently partnered with the COP26 climate summit and Lesser is chief adviser to the World Economic Forum’s Alliance of CEO Climate Leaders.

The company says it completed about 400 climate and environment-related projects for 300 clients in 2020, though Lesser insists the primary rationale for acting was the impact of global warming “on biodiversity and on livelihoods”.

The commercial benefits of adapting to meet rising demand from companies for advice on how to mitigate their contribution to climate change was secondary, he says.

Lesser has said previously that he does not think of himself as “the grand visionary who thinks up everything myself”.

He describes the climate debate as one of the best examples of the culture of challenge he has tried to maintain as a CEO, with staff encouraged to give their honest views and not to simply tell him or senior colleagues what they think they want to hear.

Fostering and listening to dissenting voices is important because of what he calls a “CEO bubble” where executives who hold power over the career progression of their colleagues have their views constantly reinforced by those around them. Over time, a “status gap” can develop, making it even less likely that employees will challenge a person who has led a firm for years, he says.

“You have to work harder, I think, in years four to eight than in years zero to four to create environments that encourage debate, to call out the people that disagree with you and thank them and show them how we changed as a result,” he says.

In a note to staff last February, he urged them to overthrow their “inner dictator” by being open to rethinking their beliefs, citing Think Again: The Power of Knowing What You Don’t Know by Adam Grant, an organisational psychology professor at the University of Pennsylvania’s Wharton School.

Lesser has been challenged from outside BCG as well as within its ranks.

Like other consulting firms that have talked up their positive social impact, BCG has faced scrutiny over its work for large oil companies, which remain heavy polluters, and for governments accused of human rights violations, such as Saudi Arabia’s.

“I think we’ve tried throughout [my] tenure, including when that [work in Saudi Arabia] got a lot of attention, to be really careful about what work we did and what work we didn’t do,” says Lesser.

Who is your leadership hero?

Nelson Mandela. I am in awe of his leadership temperament to boldly demand change but to do it by bringing people together despite all he was forced to endure.

If you were not CEO of BCG, what would you be doing?

What was the first leadership lesson you learnt?

It all starts with creating the right team — top talent, aligned purpose and aspiration, mutually supportive, with the courage to speak up and push for change.

“We’ve walked away from hundreds of millions of dollars of work that went to other consultancies on projects . . . that don’t fit what we want to do,” he adds.

The firm says it has guidelines in place to ensure it does not work with companies “openly indifferent to or in denial of climate change” and that it will not work for prospective clients in high-emitting sectors unless they have a plan to tackle climate change.

After almost a decade leading the firm he first joined in 1988, on October 1 Lesser will become BCG’s global chair. Christoph Schweizer, a 23-year veteran of the group, will assume day-to-day control as the new chief executive.

Lesser expects being chair will give him more time to work directly on a small number of client projects and on “thought leadership” on societal issues such as climate, Covid-19 and racial equality.

Those broader issues have become a significant focus of companies in attracting employees and customers, but when Lesser was canvassing his colleagues for votes back in 2012 they barely registered.

“We did social impact work . . . but this broader sense of ‘purpose’ was really not in the dialogue.”