Sign up to myFT Daily Digest to be the first to know about Chesapeake Energy Corp news.

Chesapeake Energy, the US shale pioneer that collapsed during last year’s oil-price crash only to emerge from bankruptcy in February, has agreed to buy rival natural gas producer Vine Energy for $2.2bn in equity and cash.

The combined company, worth $9bn including debt, will hold a commanding position in the Haynesville Shale, a rock formation rich in natural gas in north-western Louisiana, close to the growing US liquefied natural gas industry on the Gulf of Mexico coast.

“Chesapeake has the scale and operating expertise to quickly become the dominant supplier of responsibly sourced gas to premium markets in the Gulf Coast and abroad,” said Mike Wichterich, interim chief executive.

The deal, which comes less than five months after Vine went public in a New York listing, will increase Chesapeake’s total production from slightly more than 400,000 barrels a day of oil equivalent to almost 600,000 boe/d.

Wichterich told the Financial Times that all the company’s Haynesville gas would be “responsibly sourced” — independently certified as produced in accordance with new environmental, social and governance metrics, including reduced methane emissions.

US shale operators are trying to reduce their operations’ greenhouse gas emissions ahead of new anti-methane measures expected from the EU, an important market for American exports, and in response to pressure from ESG-focused investors.

Private equity firm Blackstone, which controls about 70 per cent of Vine’s shares, will vote for the deal and become one of Chesapeake’s largest stakeholders, with slightly less than 10 per cent of the company’s outstanding shares, according to Wichterich.

The deal gave the restructured Chesapeake scale while preserving its finances, said Wichterich.

“We will not break the balance sheet,” he said. “We are not the old Chesapeake.”

The US shale patch is consolidating after last year’s oil crash, which prompted widespread bankruptcies and forced operators to shut wells and slash planned capital spending.

More than $30bn in shale deals went through in the second quarter of the year and analysts expect more M&A as operators buy new production rather than drill for it.

Leading oil and gas groups including Chesapeake, known in recent years for profligate expansion through debt-fuelled drilling, have vowed that a new era of capital discipline has at last arrived in the sector. 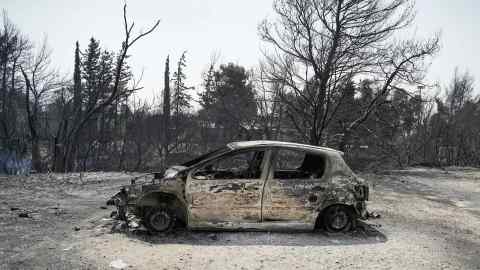 Chesapeake said on Tuesday it would pay 50 per cent of its free cash flow to shareholders each quarter, starting next year. The Vine acquisition would also allow Chesapeake’s base dividend to increase by 27 per cent, the company said.

Chesapeake declared bankruptcy last June after years of struggling under debt amassed by founder Aubrey McClendon, who died in a 2016 car accident a day after being indicted on charges of rigging bids for drilling rights.

McClendon’s Chesapeake pioneered the widespread use of hydraulic fracturing and horizontal drilling early this century to become the biggest US gas producer after ExxonMobil. The company was worth about $35bn in 2008, more than six times its market capitalisation on Tuesday.

Vine’s initial public offering in March — a rare listing in a sector out of favour on Wall Street — received a lukewarm response from investors and its shares are up just 10 per cent since then, far trailing rivals.

Chesapeake on Tuesday reported a second-quarter net loss but beat analysts’ cash flow estimates and raised its guidance for future production and earnings.